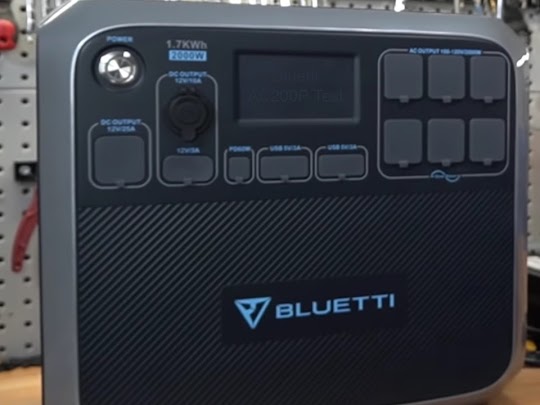 The Bluetti AC200P is a top class mobile power generator and becomes a potent solar power plant with matching panels.

In today's detailed test, we put the PowerOak Bluetti Power Station AC200P through its paces.

As a true power and endurance package, the mobile power storage unit delivers 2000 watt hours of capacity. Thus, the AC200P's performance data is roughly on par with the EB240 predecessor from the same manufacturer.

In addition to performance and capacity tests, we will also discuss advantages and disadvantages for certain applications in this article.

Powerstations are becoming more and more popular. And rightly so! A large power station test, so a large battery with 230V outputs, etc., is very versatile. You can use them for camping, to run coolers, in the camper or as an emergency generator.

Just in recent months, we have been clearly demonstrated how practical such an emergency generator can be.

This is what the Bluetti AC200P Power Oak solar power station does really well:

The PowerOak AC200P power station and emergency generator in the test.
With 420 × 280 × 386mm and a weight of about 28Kg the PowerOak AC200P Powerstation is no lightweight! This is not something you just take camping.

In terms of workmanship and feel, Power Oak has done a good job. The power station looks solid and well built, which is appropriate for the price.

Or to put it in complete sentences: you have fantastic, versatile technology with the Bluetti Solar Powerstation AC200P, which also looks really nice and is easy to use even for laymen after a little training. This makes your own solar power generation even fun.

We noticed the shock-absorbing rubber feet on the bottom positively during testing: The battery even easily copes with a rough set-down.

However, we are a bit surprised why they did not think of wheels on the bottom or a trolley function - that would have made transport much easier. Mobile generators (such as the Honda EU 30is Inverter we tested) usually have wheels for better handling.

Casters or wheels on the bottom would therefore be desirable - but they are not a must for us. This is especially true because powerful Power Stations like this one are designed for indoor use, for example in a camper or caravan. They therefore don't need to be moved as often as generators that we plan to use outside the vehicle.

With an extension cord in tow, the AC200P can stay in the same place for the entire vacation.

So-called LiFePO4 "lithium iron phosphate" battery cells are installed in the PowerOak AC200P. Why not a Lithium Ion battery as normally used?

In this case I think LiFePO4 are better than normal Lithium Ion batteries! LiFePO4 battery cells have a much more stable battery chemistry. Because of this, they have a much higher cycle performance and are less dangerous to fire.

Thus, the batteries in the AC200P are said to withstand 3500+ cycles, which is absolutely possible. A comparable lithium ion based battery would only last around 1000 cycles well.

All connections are protected from moisture and dirt by easily removable rubber covers. These are important because the Power Station itself is not splash-proof.

PowerOak Bluetti AC200P Test - Connections for AC 230 V, DC 12 V, USB 5V
At the top right of the front of the control panel are two Schuko 230-volt AC outlets. We can draw a maximum of 2000 watts of continuous power via these - which is enough for almost all applications in the camper. The short-term overload power of the battery is even 2500 watts (maximum two minutes) for particularly high starting currents, the peak load (for a few seconds) even 4800 watts.

The AC200P uses a true sine wave inverter for the AC power, which produces clean power just like from the wall socket at home. So we can run sensitive electronics on the AC connection without damaging these devices.

PowerOak Bluetti AC200P test - connections for AC 230 V, rubber caps, inverter
On the top left just below the ON/OFF switch we find a DC output with 12V at 25A, which is especially interesting for campers. Those who use a parking heater, for example, often need a high starting current.

Next to it on the right is the DC output for the cigarette lighter with 12 V and 10 A. Those who want to operate an electric cooler with 12 volts will use this connection.

Just below it, we find two DC connections with round plugs (12 V and 3 A).

PowerOak Bluetti AC200P test - connections for DC 12 volts, power switch.
Next to it on the right is the USB-C port with Power Delivery (PD) with a maximum output of 60 watts. So, if you want to charge your laptop, it is best to use this connection option for this.

At the bottom right of the panel we find a total of four Fast Charge USB-A ports with 5 V and 3 A.

On the upper side, the manufacturer has fortunately provided two induction charging areas next to each other. We can charge our smartphones with up to 15 watts there. Convenient: The PowerOak manages to recharge the phone through the case in the picture.

What can you connect to the Powerstation AC200P?

A few years ago, we analyzed which devices can be connected to a large powerbank for an article. We stopped at about 100 watts, so the selection was rather limited.

The big highlight of the Bluetti AC200P, however: The power station allows up to 2,000 watts of strong devices to run on it via AC. What I successfully got to work or charged on it:

After we had already had positive experiences with PowerOak's AC50S and EB240 in the past, the powerful Power Station AC200P also convinced us in the test.

The powerful, high-quality lithium iron phosphate battery is ideal for caravans and campers - provided you can overlook the high weight.

The AC200P is an important step towards self-sufficient supply - especially in combination with a powerful solar system. This can fully recharge the power pack in a relatively short time. For vanlifers in southern countries, it is at least a valid backup solution.

Despite the quite appropriate, quiet criticism, you may have already read it between the lines: I am very fond of the Bluetti Powerstation AC200P and the optional solar panels type SP200. This is high-end mobile solar charging! Both are first class quality. If you find the space for it, money (and weight!) don't matter, then here you have a wonderful system to generate power quickly and easily on the go. However, you will need at least two of the expensive panels to supply the massive power station with enough energy.

The AC200P is not really mobile - we therefore recommend it for campers who want to use the power station mainly at the same place.

If you are looking for a more compact and mobile device for camping or for small campers, you should go for the AC50S or even the Jackery Explorer 240. The AC200P just needs a little space in the camper and takes up more payload.