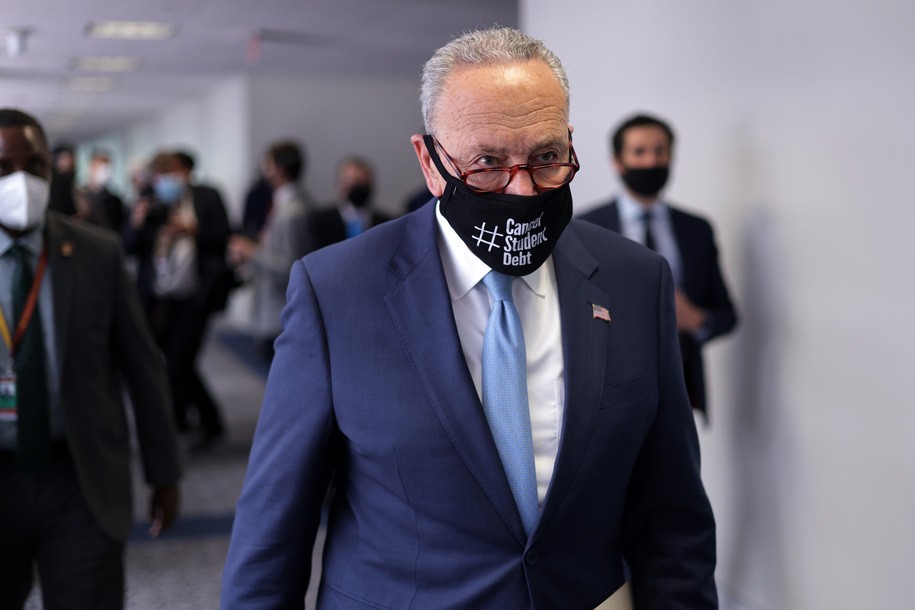 Senate Democrats may need to consider this reconciliation plan sooner rather than later, following Senate Republicans throwing cold water on any progress on major immigration bills passed by the House—with support from a number of Republicans—more than a month ago. Senate Republicans are in fact dragging out the same old tired excuse they’ve been using for years now to not act on humane legislation: the southern border.

“Lindsey Graham introduced a bipartisan immigration bill 43 days ago. But if it came up on the Senate floor today, he wouldn’t support it,” Politico reported in March. “’God, no,’ the South Carolina Republican senator scoffed in an interview. ‘I’m not in support of legalizing one person until you’re in control of the border.’” The Times reports that Texas Republican John Cornyn claimed that “[b]efore we can do anything meaningful on immigration, we’re going to have to deal with the current crisis at the border.”

”What an utter crock,” Washington Post columnist Greg Sargent responded in his latest piece. “Here’s how this scam works: There is no point at which Republicans will ever acknowledge that this ‘crisis’ is being managed. They have already telegraphed that they hope to win back control of Congress in 2022 largely with a message hyping this ‘crisis.’” I mean, recall the ridiculous border stunts Republicans like Graham and Cornyn carried out and that earned them ridicule from the National Butterfly Center. I mean, picture being such stunt queens that it earns you mockery from a butterfly center!

“Does anybody imagine there will come a point when Republicans will say, ‘Okay, Biden’s totally got the border under control now, so let’s get serious about working with Democrats on legalizing a lot of immigrants’? Of course not,” Sargent continued.

We certainly haven’t heard anything from these very Republicans in recent days, following news that the number of unaccompanied children in harmful Customs and Border Protection facilities dropped nearly 90% from March, from 5,767 children at the end of that month to 677 as of this past weekend. Since then, BuzzFeed News reports that number is now just over 600. The number to strive for is zero, but this shows remarkable progress by the Biden administration. But Republicans who went to the border to pretend about children are silent on that.

“It’s possible Republicans might prove willing to negotiate limited immigration solutions, particularly on the dreamers,” Sargent continues. But we need broad relief for families, and even when it comes to undocumented youth, Republicans are acting in bad faith. Cornyn during his reelection ran a Spanish-language ad falsely claiming support for the Dream Act, a bill that he has yet to cosponsor and champion since winning that race. Undocumented youth and their allies last month gathered outside his office to remind him of that claimed support.

President Biden has been generous in continuing to make overtures to Republicans, most recently during his address to Congress last week, where he called on legislators to act on permanent relief for immigrants. “If you believe in a pathway to citizenship, pass it,” he said. But with the window to act remaining open for only so long, Democrats should be ready to use all tools at their disposal to move forward on their own. Republicans can claim all they want that Democrats refused to work with them, but those claims will be nothing but lies.

“Democrats must act,” Immigration Hub Director Sergio Gonzales told the Times. “Now is the time. This year is the time. We must have citizenship this year.” Texas Rep. Joaquin Castro said in the report, “We ought to take this opportunity, this term, to finally do what the American people want us to do, which is to pass immigration reform. I don’t think the Republicans should be able to run the clock out on this term before we pass meaningful immigration reform through the Senate.”

Gov. Ron DeSantis of Florida said on Thursday that he would pardon “any Floridian” who violated mask or social distancing mandates.Mr. DeSantis, a Republican,...
Read more
Business

Disney+ subscriber growth is slowing like Netflix — with one worrisome difference

A performer dressed as Mickey Mouse entertains guests during the reopening of the Disneyland theme park in Anaheim, California, U.S., on Friday, April 30,...
Read more

Gov. Ron DeSantis of Florida said on Thursday that he would pardon “any Floridian” who violated mask or social distancing mandates.Mr. DeSantis, a Republican,...
Read more

Disney+ subscriber growth is slowing like Netflix — with one worrisome difference

A performer dressed as Mickey Mouse entertains guests during the reopening of the Disneyland theme park in Anaheim, California, U.S., on Friday, April 30,...
Read more

Disney+ subscriber growth is slowing like Netflix — with one worrisome...